"The little cloud increaseth still
Which first arose upon Mow Hill
The centenary Camp Meeting was held at Mow Cop on May 25 - 27, 1907"

Background notes
The Primitive Methodist movement was founded by Hugh Bourne and William Clowes. Bourne was the organisational genius, overseer, master strategist and tactician, and an introvert by nature. Clowes by contrast was an extrovert, and the leading missionary and apostle of the movement. He preached the gospel to tens of thousands, usually in the open-air, and was possibly the greatest preacher in his generation.
On May 31 1807, Hugh Bourne organised the first English "Camp Meeting", an open-air all day service, on Mow Cop in North Staffordshire. As a direct result of involvement in these meetings, both Bourne and Clowes were expelled from the Wesleyan Methodists. Subsequently the new movement took the name "Primitive Methodism". The movement grew rapidly and by 1907 they had established five thousand churches, gathered eight hundred thousand members and adherents, 500,000 Sunday School scholars, and spread to the U.S., Canada, Australia and New Zealand. Estimates of the attendance at the Centenary services at Mow Cop in 1907 vary from 60,000 to 100,000 people present. Primitive Methodism was a movement amongst working class people during the industrial revolution. The transformation of individuals, families and communities was often dramatic. Known as "The Ranters" they were persecuted by mobs and gangs, they were often brought before magistrates and a number of their early preachers went to jail. The Ranters were well known for their lively singing and shouting. It was quite common for people to experience shaking, or to lie apparently motionless under the power of dynamic preaching inspired by the Holy Spirit.

The inscription on the back of the plates reads as follows: 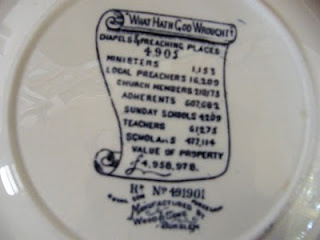 In summary, by 1907, that's over 800,000 members and adherents, five thousand churches and nearly half a million scholars.