For some years now astronomers, physicists and cosmologists have been asking big questions about the origin of the universe and life on earth. Rather than simply asking how things came to be they are asking why things are the way they are. The why questions cause them to ask God questions.

Here are two books that are well worth reading.

1. The Goldilocks Enigma: Why Is the Universe Just Right for Life?

By Paul Davies, a physicist and cosmologist.

If any of the basic features of the universe, from the properties of atoms to the distribution of the galaxies, were different, life would probably be impossible.? (page 2)

"... a bio-friendly universe looks like a fix - or a 'put-up job', to use the pithy description of the late British cosmologist Fred Hoyle. It appeared to Hoyle as if a super-intellect had been 'monkeying' with the laws of physics ... On the face of it, the universe does look as if it has been designed by an intelligent creator expressly for the purpose of spawing sentient beings" (page 3)

Here is the Amazon link

Sir Martin Rees delves into the numbers behind the forces that govern the universe, explaining how delicately balanced they are. He identifies six numbers.

"These six numbers constitute a 'recipe' for a universe. Moreover, the outcome is sensitive to their values: if any one of them were to be 'untuned' there would be no stars and no life.Is this tuning just a brute fact, a coincidence? Or is it the providence of a benign Creator?" (page 4)

Here is the Amazon link
Posted by Dave's Blog at 3:05 PM No comments: 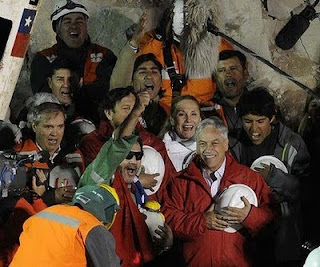 The rescue of the 33 miners after 69 days underground from the San Jose mine in Chile provides a real-life metaphor for what Christ has done for us:

For he (Christ) has rescued us from the dominion of darkness and brought us into the kingdom of the Son he loves, in whom we have redemption, the forgiveness of sins. (Colossians 1:13-14)

Here is another mine disaster where the human outcome was different, but the faith of the trapped men and boys sustained them - the Seaham Colliery disaster of September 1880
Posted by Dave's Blog at 2:43 PM No comments:

Praying through the storm

When her friend, fellow preacher and future husband, Thomas Russell was in prison for preaching the gospel, Elizabeth Smith a Primitive Methodist pioneer evangelist prayed this prayer:

Thanks be to God, the storm which distresses us helps us towards the shore;

Though there are changes, it is but one journey, and we soon shall be at the end.

Though there are many conflicts it is but one battle;

And we shall soon shout VICTORY! through the blood of the Son of God!

Quoted in The Life and Labours of Elizabeth Russell, from The Writings of Thomas Russell, page 198 Tentmaker publications.

For those who would like to do something more to protest against Victoria's terrible abortion laws, allowing abortion on demand up to full term, here are some useful websites:

Please help to make sure this issue is on the main agenda for the Victorian state election in November.
Posted by Dave's Blog at 9:11 AM No comments:

Email ThisBlogThis!Share to TwitterShare to FacebookShare to Pinterest
Labels: general

We need heroes not celebrities

I have many heroes. Among them are Winston Churchill, the leader of Britain during WWII, John Wesley, the founder of Methodism, and William Wilberforce, who fought against slavery. Others are less well known, but they are my heroes of the Primitive Methodist movement. They are people such as:

It seems to me that we don't need more celebrities in our modern day culture, we need more heroes like these men and women of faith.
Posted by Dave's Blog at 3:20 PM No comments: 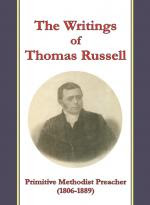 Thomas Russell was an evangelist and missionary of the Primitive Methodist movement in England and Ireland. He was born in Middlewich in Cheshire, and first came into contact with the Primitive Methodists in 1817. He became a full time travelling preacher (or missionary evangelist) in 1829. He endured persecution, hardship and personal tragedy with courage, perseverance and fortitude.

In 1830 he was falsely accused and unjustly imprisoned for preaching and sentenced to hard labour for three months, in default of payment for a £10 fine. For ten hours each day he and other prisoners had to endure rigours of being forced to push a large mill wheel to manually grind corn in half hour stints. For thirty minutes they were covered in sweat and every bone in their body ached. Then for the next half hour the prisoners pulled old ropes to pieces with their fingers and thumbs. And so the cycle repeated, half an hour on, half an hour off.

In prison he was hungry. In his journal he writes “hunger pinched severely, so that I often wondered why a human being could not eat the ground to pacify the cravings of hunger”. Soon he became ill, and was unable to stand at the mill wheel. The prison doctor was called, who simply exclaimed “Here he came to be punished, and here he must be punished.” So Thomas Russell was ordered to the wheel again, and he wrote that “I found that the scripture was true, ‘The tender mercies of the wicked are cruel’.” It was rough justice.

Thomas Russell was instrumental in the missions to Berkshire and Hampshire in 1830. He was passionate in prayer, and a powerful preacher whose hearers were often moved to tears. He preached courageously, facing stones, other missiles, and vehement opposition. The mission was highly successful and soon spread to neighbouring counties.

He was engaged to and married Elizabeth Smith, a female preacher in 1831, and they had a baby, Julia who died in 1835. Four months later his wife died, at the early age of 30. Nearly 2000 people attended her funeral. He writes “Thus I was deprived of a child and wife in a few short weeks … But in a few days I returned to my labours, though with nearly a broken heart”. As he processed his grief he continued in effective evangelism in the Staffordshire Potteries.

In 1838 after three years as a widower, he married Elizabeth Duke, a Primitive Methodist convert from the Weymouth mission. By July 1847, he was stationed at Guernsey in the Channel Islands when his second wife died leaving him with four children, the youngest of whom was very ill. He writes “Her mother had made a most triumphant end; yet I dreaded the loss of the child”. He found practical sympathy and support from friends in the islands of Jersey, Alderney and Guernsey.

In 1849 a cholera epidemic swept across England, and people died of this dread disease within days or even hours of the onset of symptoms. In one instance after preaching in Hartlepool market place, a woman was converted through Thomas Russell’s preaching, and died just twelve hours later. The epidemic was a significant factor for the increase in conversions across the country. Thomas Rusell and his fellow missionaries visited the sick and dying at great personal risk.

In 1855 he was sent to Portadown in Ireland. It was the last place on earth he wanted to go and his four daughters cried bitterly when they heard of the posting. They moved as a family to live in Ireland and, in spite of initial misgivings, he had a vibrant ministry there. Seven years later he was posted to the Yorkshire dales, but in the meantime his daughters had married in Ireland. He recalls that “though I went to Ireland with reluctance, I left it with regret”. He ministered in the Yorkshire dales for three years until 1865 when he transferred to St. Albans.

During his life the Primitive Methodist movement grew from a small revivalist group based in the English midlands, to a worldwide movement that had a significant impact on the lives of working class people and their communities. Thomas Russell was one of a second generation of preachers who continued what had been started by the pioneers, Hugh Bourne and William Clowes. Thomas Russell died in 1886, and is buried at Englesea Brook in Cheshire. We need men and women of faith, courage and perseverance like him today.

Quotations from The Writings of Thomas Russell, originally published in 1869 and republished by Tentmaker publications 2005.